The Hagia Sophia project, initiated by Dr. Ken Dark of the University of Reading (UK) in 2004 and co-directed by him and Dr. Jan Kostenec, is supported by the Charles University Grant Agency (fundings provided for 2004-5 and 2007) and Late Antiquity Research Group and takes place with the kind permission of the Turkish authorities and the permission and assistance of the director and staff of Ayasofya Müsesi.

The church of Hagia Sophia, in its present form built by Justinian I in the sixth century, is probably the most famous surviving structure from the Byzantine world. However, it is the third cathedral church at the site. The first Hagia Sophia was consecrated in 360 under the reign of Constantine´s son Constantius II. It burned together with the neigbouring Senate during the riot in 404 and was perhaps first repaired by the Emperor Arcadius and then built anew or thoroughly reconstructed by Theodosius II and inaugurated in 415. (fig. 1)

This project aims to place emphasis not on the well-studied and impressive church structure, important as that is in many ways, but on the associated Byzantine buildings around it as Hagia Sophia can in our opinion only be properly understood as the focus of an ecclesiastical complex rather than a single ‘freestanding‘ structure (fig. 2).

The detail re-examination of the area of the Hagia Sophia complex produced new evidence not only for the sixth-century structures that encompassed the church but also for those contemporary with the first and second cathedral. In summary, we have identified the earliest remains in the Hagia Sophia complex in two sites: First, the wall above the fifth-century hypogeum situated immediately north of the church, which is roughly perpendicular to Justinian´s church. The bricks employed in this wall are distinctively stamped on their sides and their dimensions point to the later fourth century (fig. 3). Second, similarly small bricks are also used in the lower part of the rear wall of the excavated monumental propylaeum of the Theodosian cathedral, which suggests that this wall belongs to the first Hagia Sophia (fig. 4). This raises the possibility that Theodosius´s church re-used what had left of the earlier church after the fire in 404.

As far as the sixth-century phase of the cathedral complex is concerned, our work also produced new evidence. First of all, the great vaulted hall flanked by other, smaller rooms on at least two levels formed apparently an important part of the patriarchal palace at the southwest corner of Hagia Sophia. Although only the north wall and part of the east wall of this hall remain, there is enough evidence to reconstruct its probable layout and appearance, even up to the springers for the roof vaulting (figs. 5, 6). The hall was juxtaposed to the domed building usually identified as the Baptistery, situated immediately east of it. This building, perhaps dating to the reign of Justin II, may also have originally served as a reception hall in the patriarchate before its subsequent re-use as a place for baptism and was connected to other structures along the south flank of Hagia Sophia by the corridor running east from its northeast corner (K.R. Dark, J. Kostenec, ‘The Byzantine Patriarchate in Constantinople and the Baptistery of the Church of Hagia Sophia’, architectura 36 /2006/, 113-130). The recent removal of modern exterior plaster leading to the exposure of the brickwork and the demolition of Ottoman annexes have enabled us to record previously unpublished features of the ‘Bapristery’ and to recognize more of its building phases (fig. 7). Moreover, we recorded a ‘new’ mosaic and fresco in the northeast baptistery porch (fig. 8).

However, the buildings of the Patriarchate and other structures in this area were probably not adjacent to the south aisle of the church but they were separated from it by courts paved with marble as evidenced by the remains of such pavements north and east of the Baptistery (fig. 9). Similar open spaces apparently existed along the north side of the church also. Again, white marble pavements survived there in two places (fig. 10). Nevertheless, in the area north of Hagia Sophia the courts were flanked not by palatial buildings but by the buildings directly connected with the liturgical use, such as the Great Baptistery and Skeuophylakion (sacristy and treasury of the church). The green-and-white marble floor and the series of the massive brick piers recorded by us presumably belonged to an important building in this area, perhaps to the Great Baptistery (fig. 11). In addition, the existence of a building projecting to the north of the (today demolished) atrium of the church which had dimensions similar to the great hall of the Patriarchate on the south side of the atrium (see above) is suggested by remains of walls we found in the substructures of the demolished Ottoman medrese (religious school).

The co-directors of the project would like to thank Dr. Tomáš Alušík and Mgr. David Lužický for their assistance during the survey at Hagia Sophia. Churches of Hagia Sophia (from right to left): church of Theodosius II, church of Justinian I as in 537 and after the new dome in 562. Parts of the church and surrounding areas surveyed in 2004-2007. 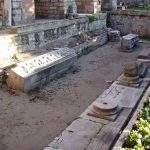 Remains of the Theodosian porch excavated in 1935 in front of the west facade of Justinian’s church. Rear wall of the porch is visible behind the large fragment of a monumental frieze. Southwest corner of Hagia Sophia showing remains of the large hall of the Patriarchate. Reconstruction of the large hall of the Patriarchate (floor supporting columns are conjectural). ‚Baptistery‘: reconstructed original plan of the building marked in red. Mosaic and fresco in the northeast porch of the ‘Baptistery’. Sixth-century marble pavement surviving in the interior of the north Medieval middle outer buttress of the church. 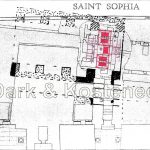