The site of Hrdly is located on a favourable position ca. 6 km south from the confluence of Ohře (Eger) and Labe (Elbe) Rivers. Its position was among the principal reasons for presence of settlement and funerary areas from multiple periods of prehistory. Large number of surface finds of various origin and purpose was reported from the cadastre of the village in the past. Among those finds are several cremation burials from the Roman period, that might have been part of a larger necropolis.

Repeated aerial prospection by M. Gojda (Archaeological Institute of the CAS, Prague) identified a fortification system composed of a ditch,foundation channel for a palisade and an advanced component in front of an assumed entrance. The structures were identified also through magnetometric survey made by R. Křivánek (Archaeological Institute of the CAS, Prague). The site is located on a pleistocene terrace ca. 160 m asl, approximately 1.1 km east of the Ohře River, which however flowed closer to the site in the past.

Between 2013-2014  the Institute undertook an archaeological investigation of the fortification system as part of the project of the Grant Agency of the Charles University. It was further supported by Melicharovo vlastivědné muzeum v Unhošti (M. Krucký), Centre for documentation and digitalization of the cultural heritage of the Faculty of Arts, University of J.E. Purkyně and the National Heritage Institute. Many other scholars, specialists and students of the Faculty of Arts, Charles University contributed to the successful conduct of the research.

The goal of the research was to verify the archaeological situations and their connection to the presumed historical events. The fortification is similar to the layout of Roman marching camps and according to our hypothesis it could have been connected with one of the Roman campaigns in Germania. To this end, geophysical prospection, surface survey, metal detector survey and archaeological probing of parts of the fortifications was conducted, including analysis of environmental samples. Among other methods used we may name remote sensing (especially orthophotos), aerial imagery and study of archive and historical sources.

The first written mention of the village are from the Medieval period. According to those sources Hrdly belonged to the Břevnov monastery. The plot no. 548 was a field that belong to the Hrdly manor. The sources enumerates its yield and the fact that wheeled carts frequented the field.

The excavations were the main activity of the research during 2012-2013 seasons. The probes were located in key places with best indication for the remains of fortifications as recorded by the aerial and magnetometric survey.

A probe close to the south-east corner revealed a fortification consisting of a ditch and a double foundation channel (probably for a double palisade)- The widht of the berm was almost 3.5 m. The features were dug into the sand bedrock. The filling of the ditch and other features occured apparently after the structure went out of use.

Approximately 20 m in front of a gap in the line of the fortification an advanced line was located. It also consisted of a ditch, probably forming part of the entrance defenses. Similar method of gate defense is known from the Roman marching camps, known as titulum.

In 2014 the excavations focused on the entrance area. The exposed area contained also two human burials in contracted position. Both individuals were laid on their left side looking south-west. These finds can be attributed to the prehistory of the region and are not connected with the excavated fortification.

Current results were able to confirm some of the data provided by the non-destructive methods, and further added to our understanding of the various fortification elements, their parameters and the character of the structures. The finds assemblage was better represented in the topsoil. It was transported here due to the recent activities connected with agriculture. Very few finds were recovered from the archaeological contexts and so far they cannot be used to securely date the construction or abandonment of the structure. Overall absence of datable material might point to temporary duration of the structure. 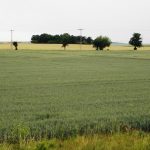 General view of the site before the excavations. 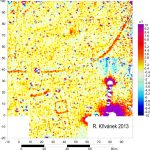 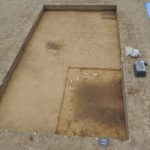 A probe opened in the entrance area, showing termination of the linear feature. One of the prehistoric graves.