In 2018, the Institute of Classical Archaeology of Charles University in Prague joined as a project partner the Lovas Archaeological Project (LAP), which was initiated a year before by the Archaeological Museum in Zagreb (AMZ). Lovas is a small municipality in eastern Croatia (historical western Syrmia), located on the elevated right bank of the Danube River, between the larger towns of Vukovar and Ilok. It is known especially for the valuable MBA hoard of gold and bronze finds, accidentally ploughed out of the ground in 1939.

The main goal of the ongoing project is to fully define the archaeological topography of the Lovas Municipality, enhancing the activities of the AMZ done in 2011. Systematic field surveys are conducted on a yearly basis in order to digitally map all previously‑discovered sites, as well as new ones. Individual sites are examined through test trenches and geophysical surveys. The project also includes the contextual, isotopic and metallographic (re-)evaluation of the Lovas and Vukovar hoards, as well as the study of unpublished material from the Lovas Municipality, which is kept at the AMZ.

Field Surveys
Research conducted in the Lovas Municipality in 2011, and by the LAP between 2017 and 2021, helped define more than 20 points of interest with traces of human activity dating to various archaeological periods (see map). The fact that many of the sites were repeatedly inhabited in different periods of the human past suggests that similar locations in the landscape were favored for habitation due to their natural characteristics. The landscape is dominated by loess plateaus and the documented archaeological sites are mostly located on the edges of such loess plateaus, on the banks of old streams, which flow directly to the Danube in the north.

Geophysical survey
One of the goals of the LAP is to determine the state of preservation of individual sites discovered during the field survey, as well as to determine the potential for future systematic excavations. For that purpose, geophysical survey was conducted in 2021 at two sites in the Lovas Municipality, namely Bečka-South (no. 19 on the map) and Bečka-East (no. 20 on the map), covering the total surface of 20 ha. Survey results suggest preservation of various archaeological structures, including possible Avaro-Slavic cemetery and Bronze Age tumulus surrounded by a ditch. Additional and intact tumulus was discovered during the survey of Jelaš Forest and it was also included into the geophysical survey. Results suggest that the entire tumulus was covered with a burnt layer, which has clear analogies in the Late Bronze Age tumuli discovered at Spačva Forest in the same region.

Trial excavations
In order to examine individual sites, test trenches of smaller dimensions were opened at several sites. Five sites were examined through test trenches. The sites of Kalvarija (no. 11 on map), Orlinac (no. 8 on map) and Staro Groblje (“Old Cemetery”) (no. 10 on map) were examined in 2011 and 2017. All three sites were inhabited in Copper Age, Bronze Age and Late Iron Age. Moreover, cemetery of the 17th and 18th century AD spread over nearby sites Kalvarija and Staro Groblje.

Both the density of surface finds and their wide spatial distribution suggested that Kovači (no. 13 on map) was one of the largest archaeological sites in the Lovas Municipality. Consequently, we decided to open test trenches at the site. Excavations at Kovači were conducted in 2017, 2019 and 2021. The best preserved archaeological structures at the site are waste and working pits of different sizes. However, large pieces of wattle‑and‑daub, destroyed pieces of house floors and results of a small-scale geophysical survey conducted in 2019 suggest the existence of prehistoric houses at the site. Copper Age pottery fragments can be connected with the Baden (3600–2800 BCE) and Kostolac (3250–3000 BCE) cultures. Other fragments indicated intense use of the site in the Middle and early Late Bronze Age, namely the Belegiš I (1700–1300 BCE) and Belegiš II (1300–1100 BCE) cultures. One of the most important discoveries at the site is a triple burial of Kostolac Culture (around 3300 BCE), containing burials of one man and two women.

In 2020 and 2021, test trenches were opened at U Mjestu (no. 3 on map), within the modern-day village of Lovas. Excavations determined the inhabitation in the transition between the Early and Middle Bronze Age (1900-1600 BCE), which remains insufficiently understood period in this part of Croatia, as well as inhabitation in the later stages of the Middle Bronze Age (1500-1300 BCE). The end of the first phase of the project is planned for 2023, and it will result in a final publication of the results.

Members of the team: 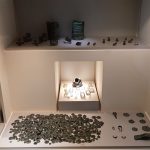 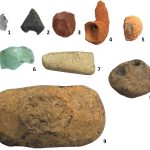 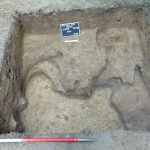 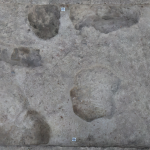 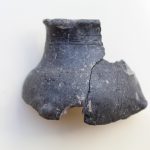 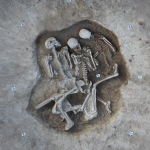 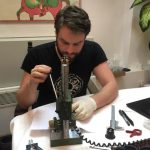