Růžena Vacková was born on April 23, 1901 as the eldest of three siblings in Velké Meziříčí. Her father was a doctor and a co-founder of the Czechoslovakian Red Cross, later he served as a director of the State Health Institute in Prague, and belonged to the ring of “Friday Men” associated with writer Karel Čapek. Her mother was also active in public and political life, e.g. in the women emancipation movement.

After graduating high school in Brno, she moved to study to the Faculty of Arts in Prague in 1920. She was profoundly influenced by lectures on art history by professor Vojtěch Birnbaum, and on philosophy and aesthetics by professor Otakar Zich. She was interested in the theater science as well. The focus of her professional interest was however on the ancient culture. Already during her studies she became an assistant of the professor of Classical Archaeology Hynek Vysoký and in 1925 she defended her dissertation dealing with the development of ancient portraiture.

She spent next year as a stipendist at the German Archaeological Institute in Rome, where she was strongly impressed by the direct contact with ancient monuments. She dedicated her studies to the Roman historical reliefs. In 1930 she received habilitation based on a two-volume study of this topic. 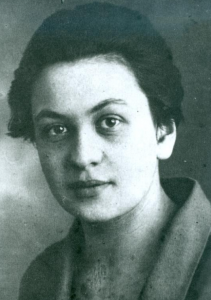 In a position of a private docent she delivered courses on the Egyptian, Greek, Roman and Provincial art, further she compiled entries on archaeology and art history for “Slovník jazyka českého” (Dictionary of Czech Language), “Ottův slovník naučný” (Otto’s Encyclopedia) and “Masarykův slovník naučný” (Masaryk’s Dictionary). She also pursued aesthetics and theater science – in this regard, her journalistic activity is important, especially theater critics published in “Národní střed”, or cultural-political essays appearing in revue “Tak”. Her “Žena v českém umění dramatickém” (A woman in the Czech dramatic art) is a monography focusing on the theatrology. In 1939 she published an essay collection “Sokrates, vychovatel národa” (Socrates, Educator of a Nation) – her brave and firm moral stand, which she put above her personal interests, deep faith in a higher moral principle, dedication to the education of the youth, and difficult fate of the famous Athenian philosopher, all remind of her own life.

Even during the WWII occupation and closure of Czech universities she continued educating students, organizing lectures in her appartment. Together with her brother and brother-in-law, who were both executed during the occupation, she was involved in resistance movement – she kept a radio transmitter and let her appartment be used for secret meetings. In 1944 she was arrested and sentenced to death. Uprising in the Pankrác prison in May 1945 saved her life.

Influenced by painful experiences of the war period she developed a strong attachment to the Catholic church – she became a lecturer of the Studia Catholica association and a member of Catholic movement “Rodina” (Family). She collaborated with “Katolík” journal and was acquainted with leading figures of the Catholic church – among her close friends were p. J. Zvěřina and p. O. Mádr.

In 1946 she became directrix of the Institute for Classical Archaeology and in 1947 she was appointed professor (retroactively from 1941) as only the second woman in the Czech history. In 1948 her 600-page theatrological study “Výtvarný projev v dramatickém umění” (Manifestation of Visual Arts in the Dramatical Arts), written during the war, was published. Her exceptionally successful and promising academic career was however, ended by the Communist coup in February 1948.

She was the only university teacher who considered it her moral duty to personally support a student protest march to the Prague Castle. She was also the only member of the university’s professor body to protest expulsion of the participants of the march from the university and publicly declared her wish to share their fate. In consequence, she was forced to stop her public lecturing activity and in 1950 she was expelled from the academic body of the Charles University due to her anti-regime sentiments.

As in the war times, she continued in organizing household lectures and seminars, and was actively involved in the activities of the Church movement “Katolická akce“. In 1952 she was tried as a “spy and agent of the Vatican” in the process together with p. Mádr and others and sentenced to 22 years in prison for high treason.

During her inprisonment Růžena Vacková was detained in various prisons. Even there, she did not concede from her values – she refused a plea for pardon submited by her relatives. In a letter, addressed to the secretary-general of the UN during his visit to Czechoslovakia in 1956, she took a stand for the rights of the political prisoners. Later, she even went on a hunger strike to improve inhumane conditions in the women’s prisons. She also continued in her educational activites and gave lectures to her fellow inmates on visual arts and aesthetics. Her firmness in her opinions and convictions did not help her on a way to freedom – the Communist regime allowed her release on probation only in 1967, spending long 15 years in prison.

The inprisonment did not break her – immediately in 1968 she became a member of a founding committee of “Klub bývalých politických věžnů” (Association of former political prisoners), and in 1977, at the age of 75, she was among the first signataries of the Charta 77.

Rúžena Vacková died following complications from a stroke in 1982. She sacrificied her personal life to her academic career, and her academic career to her moral convictions. She never stopped in her professional and educational activities even though the Nazis and the Communists severed contact with the academic world and literature.

Her “Vězeňské přednášky” (Prison Lectures), recorded by fellow inmates D. Skálová and D. Šimková, were published by the Charles University Archive after her passing. “Věda o slohu” (Science about Style) was her next posthumous publication, in which she developed and matured legacy of her teacher V. Birnbaum.

President Václav Havel awarded her in memoriam Order of Tomáš Garrigue Masaryk on October 28, 1992 for bravery and life-long accomplishments in the academic and educational sphere. For her contribution to the education she furhter received a Golden Medal of the Charles University.

I agree with the opinion of the dean, regarding the events of the past days, but I am missing a statement that every society constitutes a moral order. About the nature of the moral order, I judge based on its standards. I am interested which standards commanded the expulsion of professors and especially of students. As far as I was a witness and took part in the manifestations, I declare, that those were true manifestations and no demonstrations, since the slogans I had heard were not political nor economic in nature. On the other hand, they were moral in nature, and if the expulsion of students was based on their participation in those manifestations, I wish to share their fate.

A commentary of prof. Růžena Vacková during the meeting of the professor body on March 4, 1948, where she sided with the students and colleagues who participated in the march on the Prague Castle in February in support of president Edvard Beneš.