In 1991 we were invited by oul Bulgarian colleagues to conduct archaeological investigations at site of Pistiros, in the municipality of Septemvri, Bulgaria. Survey was conducted in 1992 and excavations begun in 1993. Overall, a segment of a fortification wall with a gate, two house complexes at the western edge of the site and additional three houses with porticoes behind the gate were excavated. The research was conducted together with the University of Liverpool and University of Bradford, UK, French School in Athens, Archaeological Institute of the Bulgarian Academy of Sciences and the Arcaheological Museum in Septemvri.

Discovery of a Greek settlement so far from the coast was a great surprise. Even larger surprise was discover of a long Greek text – an agreement between the inhabitants of the place and Odryssian kings. The text was found in secondary position in a later Roman wall that re-used many stone elements from the older Greek settlement.

The site was inhabited since the end of the 6th c. BCE. Monumental fortifications and orthogonal street plan was laid out in the third quarter of the 5th c. BCE. The site was founded by citizens of two Greek cities on the northern coast of the Aegean Sea – Maroneia and Thassos, together with their “daughter communties” Apollonia and Pistiros. All the new inhabitants received citizenship of the new community (an emporium) but also retained the citizenship of their mother cities. The long inscription tells us that the emporium enjoyed full autonomy under the Odryssian king. The king also freed them from custom duties, but at the same time they were liable to pay taxes to him. The inscription was commissioned before the mid-4th c. BCE. Apparently, the agreement came after an armed conflict that damaged the site, but soon after it was restored. The city flourished during the second and third quarter of the 4th c. BCE. Thassian and Knidian wine and fine Attic pottery was imported and thriving commercial activity is further attested by numerous coins of the Greek cities in the Northern Aegean and Hellespontus. Finds of moulds and production waste indicate manufacture of jewellery and metal wares in bronze, gold and silver.

The site is located on Maritsa River, which was probably navigable to Pistiros, at the western edge of the Thracian Plain. Tracks leading to the main gate and found also in the exposed streets show that wheeled traffic was also common. Although transport over the mountains to the south was carried out by mules and donkeys as was common until modern times.

After the second destruction in the last quarter of the 4th c. BCE the city shrunk and houses outside of the city wall were not re-built. Also the import of Thassian wine and Attic pottery diminished, but the city life continued until the Celtic invasion of Greece in 279/8 BCE. A large hoard containing 550 silver coins found in the excavations was deposited at that time. It contained mainly coins of Lysimachus and other diadochs, the successors of Alexander the Great, whose three gold coins were also part of the treasure. The hoard was buried under the floor of the house A with proticoes on the main city throughfare. Among other finds from the house were large jars and number of kantharoi (drinking vessels). Presumably, large quantities of food and drinks were stored in the house and so perhaps it was a tavern. Three astragals (sheep bones) were deposited on top of the jar containing the coins. These were used in Antiquity for a game similar to our backgammon.

After its destruction by Celts, the emporium was not re-built. There existed only a small settlement on its ruins whose inhabitants were engaged in metallurgy of iron, copper, gold and silver. The deforestation of the region was probably triggered by overexploatation of the wood for fuel and metal smelting during the 2nd c. BCE and subsequent erosion products covered the site. Rich deposits of minerals were probably one of the reasons for the foundation of the emporium. Apart from metallurgy, the place was important commercial centre, engaged in trade with the Odryssians, Triballi and other smaller Thracian tribes to the north.

The city wall was around two meters wide with foundations from large roughly worked boulders and fieldstones, with additional two courses of hewn stones above them, the upper part of the wall was built of mud bricks. The wall was around 6 m tall with a wall-walk covered by terracotta tiles (like the rest of the houses in the city). The eastern gate was protected by a tower and a bastion, enhancing its defensive value.

Houses were built of mud bricks, columns and roofing of wood. Fragments of monumental architecture (in stone, probably representing a temple) were found in a place where the site was damaged by the meandring river.

The oldest Attic pottery on site is a Black-figure from the end of the 6th c. BCE. Red-figure vases of the 5th c. BCE are less frequent, with the exception of the last quarter of the 5th c. BCE. Fine wares of the first three quarters of the 4th c. BCE are very common in the contexts. Among these are so-called Kerch Vases and fine black-glazed ware, especially drinking vessels, bowls etc. West Slope pottery reaches the site at the beginning of the 3rd c. BCE. 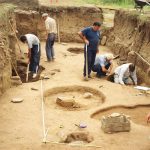 South-eastern part of the tower flanking the main gate

Cleaning of one of the towers Segment of the paved road with water channels 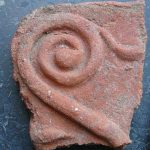 A fragment of a sima or acroterium from a monumental building 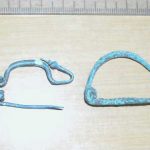