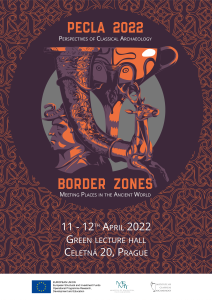 The 9th PeClA 2022 International Postgraduate Conference (Perspectives of Classical Archaeology) will
be held at Charles University in Prague, Czech Republic.

PeClA 2022 is a two‐day conference in Classical Archaeology and Classics aimed at postgraduate / doctoral students traditionally offering a space for presenting research results, discussion, and an
exchange of ideas, in a friendly and supportive environment. This year’s theme of the conference is:

Borders, buffer zones, and frontiers between larger geographic, and cultural entities or social groups in the ancient Mediterranean as well as within the classical societies have always been a central and very popular research topic. According to their contradictory nature, these areas could serve both as demarcations of identities and/or places of interaction. Following the so‐called postcolonial turn, some of the interpretative models aiming the role of border zones have been reviewed (core‐periphery), on the one hand, while new views emerged in an unprecedented upsurge (various ‘‐isations’ phenomena, acculturation processes, and migration theories), on the other hand. Therefore, the primary aim of the conference will be to address all the possible facets of the border zones / meeting places in the ancient world, from the Bronze Age to the Late Antiquity.

The postgraduate conference follows the Adaptation and Creativity along the Border Zones – conference https://borderzones2021.wordpress.com/, which focused on more general and methodological aspects. The main task and objective of our conference is to discuss concepts, strategies and transformations of border zones / meeting places in the ancient world using specific case studies from the Mediterranean in a broader sense; we seek to comment on the cultural and social aspects of the borders on a macro or micro level (e.g. Aegean region, Attica, polis), the geographic and environmental characteristics of assumed demarcations, the economic potentials of frontiers, the significance of border zones for the identity formation, and that of meeting areas as so-called spheres of interaction. These questions should allow us to understand the border zones as an inherent part of the ancient world relating to its transformation and development between the 3rd millennium BC and 5th century AD.

Conference proceedings: individual contributions can be submitted by the authors for publication in the journal Studia Hercynia
(https://studiahercynia.ff.cuni.cz/en/journal-2/)

We are looking forward to seeing you in Prague!

There are no upcoming events.